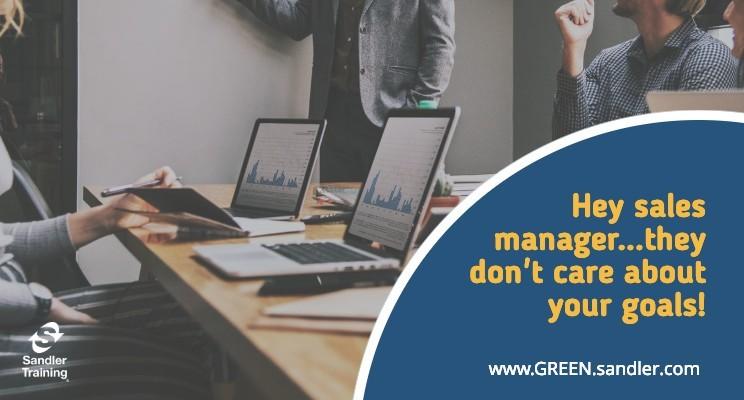 It sounds harsh, doesn't it? But they don't. Your sales team could give a rip about your goals. The district sales goal. The region's sales goal. The company's goal. Really. They don't care. They'll bob their heads and even offer their own, "Yes, boss, we can do this!" but it's eyewash. They really don't care. I didn't. And you didn't either.

"OK gang...here's a chart with our district's numbers compared to the rest of the country. You can see we are a little behind where we want to be. But I know we have the most talent and I'm confident that we'll be able to catch the Midwest Region and then we'll put Mid-Atlantic in our sites...heck, by the end of the year, we can be number 1!

If you have worked one day in sales for a large company, you have heard some version of this "motivational message." There is nothing wrong with it. We all want to be on a winning team. As a sales manager, I've uttered the same words. Guilty. But this kind of message has no impact - and it may even fuel cynicism.

Managers think they are being motivational. Even inspiring. Heck, every manager wants to try out their "win one for the Gipper" speech.

But it misses the mark.

First, motivation is not a group thing. It's an individual thing. Sure, I can give a rousing speech and tug on heartstrings. People will be inspired...in the moment. I call it "Cotton Candy Leadership." It's tastes good. No, it's awesome! But wait...where did it go? It vanished as quickly as it appeared. It just isn't effective for creating behavior change...and isn't that what we are after? Do more, do things better or do things differently? When the emotions settle (generally by the time dessert and coffee are served), we go right back to the beliefs and attitudes we had when we walked in the door.

And what gets your sales team going in the morning and in the field with a burning desire to sell more? It's not the firm's sales goal. It's not the bosses goal. They don't care that the boss is trying to win a trip to Jackson Hole. Sure, they'd be happy for their leader. They'd be thrilled if the company hit their sales goal. But that's not enough to make one extra call on a rainy Monday or make those 20 dials every day.

Salespeople sell for their reasons, not the company's reasons. Your job as a sales leader is to understand what makes each of your salespeople tick. Find out about their personal goals. What's most important to them? Get to know their why. Help them build their own dreams. It's one-on-one. It's personal. It's about them.

Managing a sales team is tough sledding. We should embrace the idea that our job is supervise, coach, mentor and train - and we get our results through consistent excellence from each member of our team. Your goals as a manager must always take a back seat to the goals of your team. 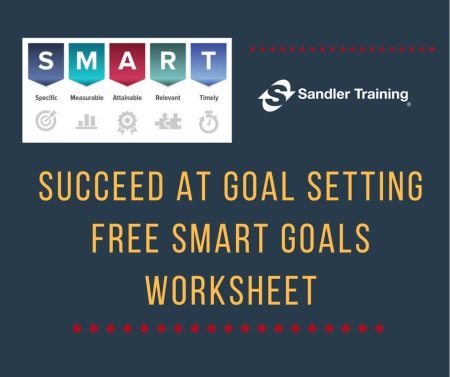 Your goals mean nothing if you don’t evaluate where you are. Download our free worksheet and prepare your goals for 2019.