Hiring in Sales: Jackpot or Crap Out? 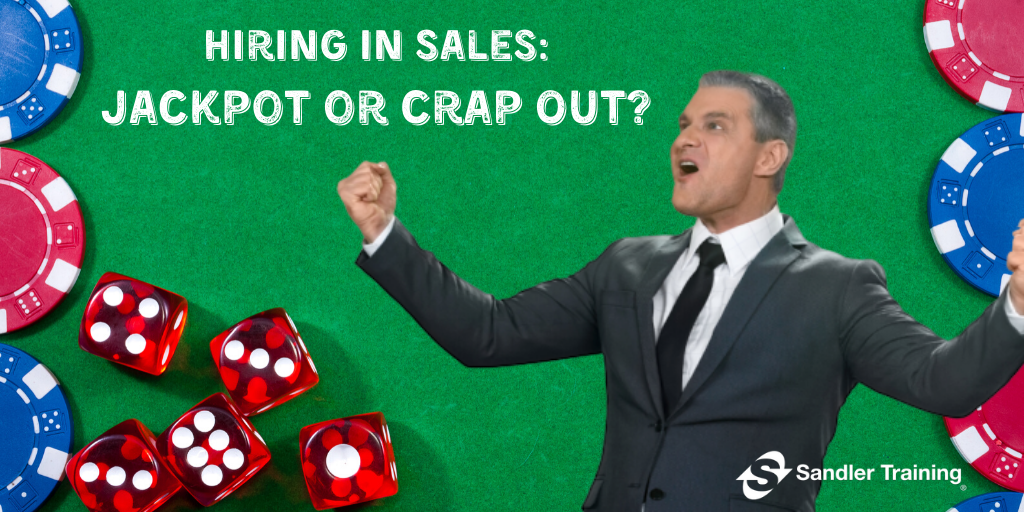 Gamble – verb; take risky action in the hope of a desired result.

From the beginning, there was gambling. In the Bible, lots were cast to see who would replace Judas’ replacement. Cockfighting, foot races, and wrestling were popular gambling events in 16th and 17th century Europe. Gambling and games of chance have been a part of nearly every culture and every continent. Lotteries. Bingo. Las Vegas! Sports wagering. People have been playing games of chance since the beginning.

According to Business Insider, in just the United States, the gaming industry is a $240 billion industry. If you have been to Las Vegas or Atlantic City, it’s pretty easy to see that the casinos are keeping more than they are paying out.

But can you beat the odds and win as a gambler?

You can. There are professional gamblers who earn a nice living by “beating the odds.” How do they do it? According to “Wild Bill”, featured on a website called Casino Blog, professional gamblers have to know what to look for – they must be astute. He says they have to be driven by data, often writing simulation programs themselves. They must not only have a system, he shares, but they also must not get caught! As a former lawyer, he says that the ability to remain objective is a key component to besting the casino.

Most professional gamblers play the games that have the highest chance for success. You won’t see professionals feeding quarters to slot machines. Nope. That’s pure chance. They play games that involve a bit more skill – and blackjack offers the best odds for those who gamble for a living. In fact, the odds of winning a hand of blackjack are slightly more than 40%.

What’s this have to do with hiring your next salesperson?

A study at Michigan State University found traditional hiring techniques only provide a 14% chance of hiring a great candidate for the role. Reviewing resumes, conducting interviews, and checking references give you slightly better than a 1 in 10 chance of hiring a winner.

If you think about it, it makes sense. Resumes are brag sheets, highlighting the positive and never sharing “I am a narcissist. I’m not a team player. I’m impossible to work with”? Yet, we’ve met them (even hired them!), right? Interviewing is a skill and sometimes, the best sales call the person makes is on the hiring manager during the interview. And reference checks? A whole lot of cherry-picking going on.

The hiring manager has no chance. The deck is stacked against them. They resort to gut instincts and feelings. And try that at the blackjack table!

Just like Wild Bill’s gambling strategy, hiring managers need to know what they are looking for. They need data. They need to be objective and take emotions out of the equation. They need to prevent “getting smoked” in the interview.

First, make sure you are using assessments that will provide you with objective data. Traditional hiring techniques will provide “above the surface” information. But that’s not enough. You need to know what’s below the surface. Does the candidate have ambition and drive? Do they have a high need for approval? Will they prospect or will they become depleted by the rejections they are bound to receive? Everyone is a great prospector in an interview!

Second, what are the specific skills, experiences, and habits that are required for success in the role? Have you written them down? I once was engaged by a company who was hiring an inside salesperson. The manager shared that this person would need to make 300-400 cold calls each week. They had narrowed the field down to two candidates. I asked, “How many cold calls did these folks make in their last job?” He said, “Neither had to do cold calling but they assured me they were willing to do it.”

Fortunately, I was able to stop them from making this mistake and they ended up hiring someone who has been successful – but that’s how it happens. We get smoked!

Hiring winners that are a good fit for the sales role is one of the most important things a sales leader does. Get this wrong and you’ll be forever pushing the rock up the hill.

Don’t leave it to chance.

Robin Green is the Owner and President of Ascend Performance, Inc., and an award-winning Sandler Trainer. Prior to Sandler, Robin was a top executive for a Fortune 50 company and by partnering with Sandler, he has helped clients from many industries realize their true potential. 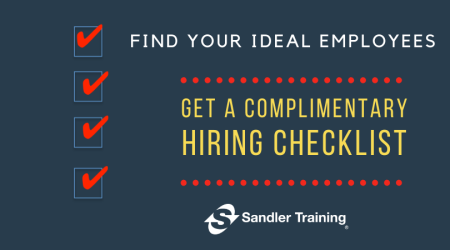 Use this checklist to hire the most qualified employees and eliminate costly hiring mistakes.