Should Innovation Be an Important Element in Your Workplace? 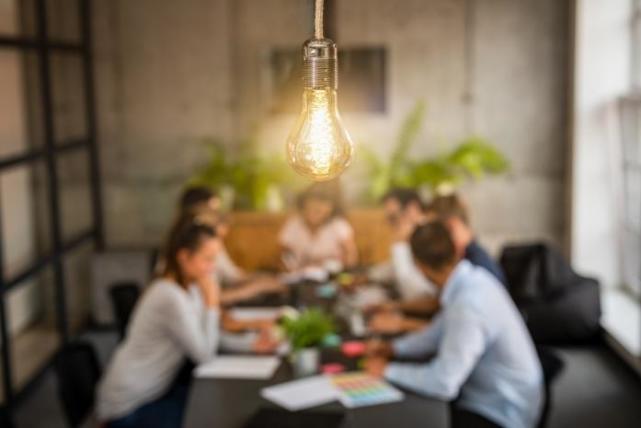 If your answer is “no” then you can stop reading now because nothing in here will be useful to you. If you answered “yes,” then you are definitely not alone.

In a recent survey by Robert Half, in which 2,200 CFOs and over 1,000 professionals were polled, it was discovered that 87% of people believe that a company’s reputation for innovation is important when considering a potential employer.

Dave Mattson, CEO of Sandler Training, said: “As salespeople, our industry is always shifting. As a result, our jobs depend on staying ahead of the curve. To avoid falling behind, we should be constantly learning, creating, and innovating.”

So, assuming you’re not part of the 13% of people who don’t care about innovation, let’s talk about five powerful tools to get you thinking outside the conventional box.

A few months ago I attended a training put on by Duncan Wardle (a former top Disney executive who was literally paid to be creative). He put us through an exercise where we broke into pairs and hypothetically planned a $100,000 party. We had one rule; we could only say “no, because” after ideas were shared.

The party we planned was horrible!

You’d think we could put a decent shindig together with that kind of a budget, but I didn’t even want to attend the party we planned.

Then he had us break into pairs again with the same guidelines, but this time with one exception. We had to say, “yes, and...” after an idea was shared. Suddenly the party morphed into something way bigger and more fun than anything we had discussed prior.

The only difference was how we responded to ideas when they were shared. No matter how stupid the idea sounded, or how much we disagreed, we found a way to say “yes, and…” Saying yes quickly transitioned ‘my idea’ to ‘our idea’ and made it bigger and more creative each time.

It’s important to remember that after the meeting ends it’s easier to simplify and narrow a really big idea than it is to expand on a small one.

“I believe everyone is creative. I also believe it’s getting harder to convince people of that.” - Duncan Wardle

2. Get Out of the Office

Psychologists are now saying that spending time outside is not only good for you, but essential for your long-term health.

Taking a walk outside of your climate controlled office and spending time in nature has been proven to increase memory, reduce stress, lower mental and physical fatigue, and improve focus. Plus, it just feels good!

Try it out for yourself. Sit back in your office chair and let your mind wander for ten minutes. Next, do the exact same thing again, but this time find a quiet place outdoors to close your eyes and think.

Which experience did you enjoy more? And more importantly, where were you able to best let your mind run free?

We have all had days that we go to work before sunrise and stay in the office way past sunset. And sure, in moderation those long work days aren’t too bad for you, but when it becomes the rule instead of the exception you are trading your health and creativity for a few extra hours in front of the computer.

“Buddha, Jesus, and Reese Witherspoon all went to the desert to seek wisdom.” - Florence Williams

Ok, hear me out on this one because it’s going to sound a little odd at first.

Here’s what you do. First, study and obsess over an idea until you feel like you have either figured it out or come to a sticking point. Next, while in sitting position grab a set of keys (or anything heavy and loud) lightly between your fingers so that they are barely being kept in your grip. And finally, go to sleep.

As soon as you fall asleep the keys are going to drop from your hand, loudly hit the ground, and wake you up with a jolt. And then you will have it – your epiphany.

This simple and unusual method of tapping into the unconscious mind has been used for hundreds of years by people like Aristotle, Einstein, Edison, and Salvador Dali. Do any of them ring a bell as innovative types?

One of the reasons this is such a powerful tool is that your brain is wired for unconscious thought. In fact, only about 5% of your brain is operating at the conscious level, but most of us are still spending most of our time using our conscious brain instead of tapping into the power of our unconscious mind.

“Just before awakening you momentarily enter the hypnagogic sleep state, a state similar to REM sleep where the mind is fluid and hyper-associative, allowing creative connections to form, connections between seemingly remote concepts that you may not realize in the structure of waking thought.” - Michelle Carr, Ph.D.

4. Ask Why, and Then Ask Why Again

Think back to your last interaction with a child. How many times did they ask “why?”

Did you lose track? Not surprising considering Harvard psychologist Paul Harris estimated that kids ask around 40,000 questions before they turn five.

Is it a coincidence then, that by five years old their brain has already developed to about 90% of what it will be by the time they reach adulthood?

So if asking questions was so good for our early mental development, why did we stop? Why have so many of us switched from expansive thinking to reductive?

You know what I think. Who cares why you stopped. Just start again!

Almost every breakthrough in history can be traced back to a question (or a series of questions). Here are two that you might be familiar with already:

In my experience, it takes four or five “whys” before we get to the truth, so let’s get asking. Sure, you might stand out a little from the crowd, but when did that become a bad thing?

“The opposite of bravery is not cowardice but conformity.” - Robert Anthony

5. Learn from People Outside of Your Industry

Think back to the last ten non-fiction books, articles, or podcasts you have spent time listening to or reading. If I were a gambling man I’d bet that 9 out of 10 of them were sales or business related.

It’s true that an in-depth study of the best minds in our industry is crucial for success. You would be crazy not to take advantage of books like You Can’t Teach a Kid to Ride a Bike at a Seminar, The Sandler Rules, Sandler Success Principles, The Success Cadence, The Contrarian Salesperson, and Prospect the Sandler Way. Learn more about these books here.

However, exclusively studying within your own industry hurts your ability to think innovatively. Industry-specific study is unlikely to ever lead your mind to innovative solutions or breakthroughs. And how could they? As a general rule, if you’re reading about it then it has already been done.

If innovation and ‘out of the box’ thinking is a priority to you then I recommend spending time every day studying experts outside of your industry. Here are a couple of examples of why this matters:

“Over the course of years of studying innovation, we’ve found that there’s great power in bringing together people who work in fields that are different from one another yet that are analogous on a deep structural level.” - Harvard Buisness Review

Concluding Thoughts and Next Steps

There you have it. Five relatively simple ways to increase innovation and creativity within the workplace.

You probably don’t want to try out all of these tools tomorrow. For best results, I recommend implementing just one of these tools a month. That gives you enough time to adequately judge the effectiveness of each tool and decide whether you want to add it your toolbox or chuck it out the window.

What is your next big idea going to be?

Check out this blog post by Dave Mattson to learn more about the importance of innovation in the workplace.

David Inman is a skilled salesman and proud USAF veteran, excited to bring his unique sales, business, and military psychology experience to the Sandler Trustpointe team as a sales associate and trainer. As a former Sandler student who tripled his income in under three years, David has thoroughly tested and proven how powerful the right selling system is and is ready to teach it to others.
Share this article: