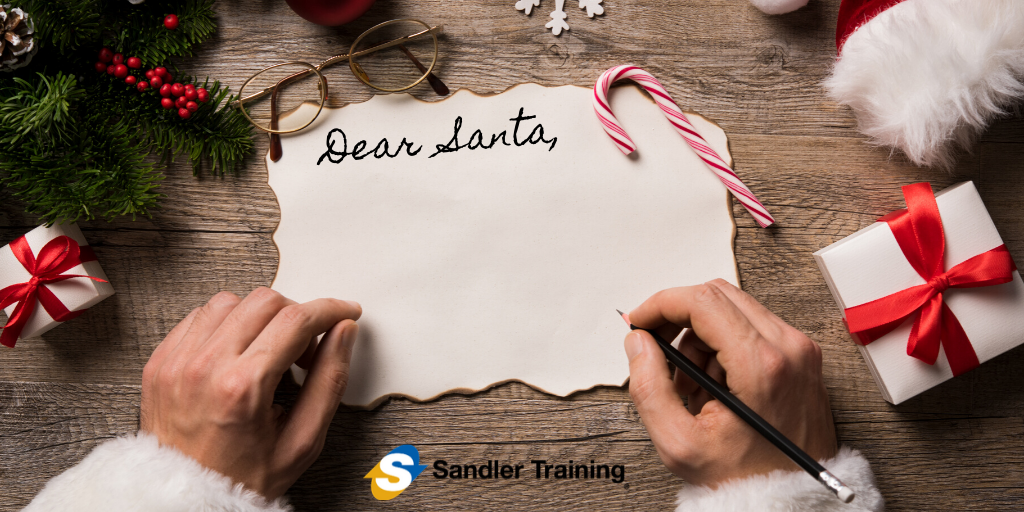 Sales managers have a tough job. It’s the toughest job in the company. An owner or boss who thinks everybody should buy what we are selling and why in the world can’t we sell it for our price? A sales team who says the leads are bad and the competition is fierce, and do you know how hard it is to sell this stuff? A “To Do” list that grows like a hydra. Cross off one thing and two things replace it. Senior management thinks it’s easy. Front-line folks think it hard. There you are - stuck in the middle. Trying to keep the boss happy and the sales team engaged. Your coaching meetings are starting to look like episodes from Dr. Phil. And it never ends.

You know that what you are doing isn’t working but you don’t know anything different. So, you spend your day solving everyone’s problems but your own. If only there was someone who could help. Someone. Anyone.

You get home in the evening, turn on the Christmas lights, kick back to watch a show….and you drift off to sleep. You are tired. You nod off. You finally succumb to the day, the week…. the year. You are quickly in a deep slumber. You begin to dream. In your dream, you are taken to a wintry village. Tinsel and snow and friendly little elves. They are busy. They are working. With a purpose. Like a team that has a goal - and a deadline.

In your dream, you see the Big Man. Red suit, white beard, rosy cheeks. It’s Santa! He notices you. He says, “Hey there friend. You look like you have had a rough couple of quarters down there in the business world. Well, you are in luck. Though my team and I specialize in toys and the magic of making little kids happy, sometimes I like to throw a little pixie dust to the old-timers. Come over here and sit down. Tell Santa what’s on your list this year.”

You think, in your slumber state, about how it has been a tough year…and how the heck does he know this stuff? Well, you remind yourself, he is Santa. He knows when you’ve been good and bad. All that stuff. Santa knows.

“Well, I appreciate you asking but I don’t know what’s what on my list. I wasn’t expecting to be asked the question. Frankly, no one around the office seems to want my input on things. I feel like I just carry out directives from my boss and my team…well, they just seem to need me to solve their problems and it’s the same problems over and over. I don’t often get to think about what I want.”

“That’s no surprise, friend. Santa gets that a lot. But I’m asking — if Santa could bring you a few things this year, what would you ask for?”

“OK, there are some things I’ve been thinking about but just don’t know how to get them accomplished. As you know, I manage a group of salespeople and they are underperforming. I guess if I’m being fair we are all underperforming. Me included. As for my team, they are good people, but we just don’t seem to playing up to our potential. And since you asked, I guess there are some things that are on my Wish List.”

“Let’s hear it - quickly. You might wake up soon!"

I’d like to help my team be more self-sufficient.

“I spend my days fighting fires. My phone rings constantly and it seems like there is always someone outside my door with a new crisis. Sometimes, it makes me feel good to be needed. I feel like I’m bringing value, but I can’t help but think that sometimes, I’m not helping my team. I mean, I listen to their problems and give them advice. When they follow my advice and it works, they take all the credit. When it doesn’t, it’s because my advice was wrong. It’s a no-win situation and I feel like I’m stuck. I think I’ve created a culture of learned helplessness. They come in with a problem and when they leave, the problem is mine. So that’s one thing I definitely want on my list. The way it is now, they aren’t growing and I’m not providing the vision and leadership my team needs.

I’d like a sales team that keeps a clean pipeline.

“Santa, this one really gets me. My boss loves when I tell her about the big, fat pipeline we have but she gets frustrated when she sees the same opportunities on there week after week. I ask my team about them and they tell me it’s going to close…but they never close. OK, some do. But most of deals are older than Grandma’s fruitcake. I press them and they just give me excuses. I wish they would qualify them better and get decisions. Stop wasting time on people that we all know are never going to say yes. But they always think there’s a chance. And it’s a false sense of security, and I think it keeps them from prospecting. They are so busy chasing people who are never going to buy that they don’t have time, they say, to find new prospects who might buy. Yes, I definitely want that on my list.

I’d like to have time to interview more candidates and consider upgrading my team.

“Don’t get me wrong Santa, I like all of our salespeople. They are good folks but…well, I don’t think some of them are a good fit for sales. And what’s worse, I think they know it. But our company is a good place to work, we’ve got good benefits. And who likes to look for a job anyway? I’ve often thought that I should be interviewing prospective salespeople on a regular basis. I have a friend who says he is always interviewing and for him, it reminds him that there are talented people who’d love to work for his company. He says it gives him the energy to help underperformers - those that aren’t willing and able to do the things they need to do to be successful - find new opportunities in the industry. I love that approach. I mean, I don’t want to be a hatchet man, but I also don’t want to have a team of people who are either unwilling or unable to do what’s required. I can’t have the success I know I deserve and frankly, they would be more successful – and happy – in another role. But I don’t have time to look and even if I did, I don’t even know what to look for anymore. Can I add that to the list?”

I’d like to have salespeople who are willing to prospect consistently.

“I feel like I’m repeating myself a bit here, Santa, but why won’t my people prospect? Part of me thinks it’s because of their attachment to their ghost-filled pipeline but I think it’s more. I think that, even though they are in sales, they don’t know how to prospect. They just sort of wing it. I’ve listened in on a few of their prospecting calls - which is a miracle in and of itself because they don’t make many - and I hear how they do it. Ugh! They sound so salesy and cheesy. Overly formal. It’s like a game of Mother May I? They are so subservient. I’d never give them a meeting if I were a prospect! I guess the good news is they don’t do it very much. But I had an old boss who said if you are in sales, you had better prospect every day. My people don’t. Santa, how can I get them to understand that prospecting is the lifeblood of their business?

I’d like to be a better coach to my team.

“Santa, if I’m being honest, I’m not a very good coach. I’ve never been trained, and my people don’t seem to be growing and developing. Our coaching meetings end up being pipeline reviews and then me telling them what I did back in the day. I do most of the talking…and I feel like I’m always trying to fix them. The trouble is, it seems, is they are never fixed. I’ve read enough to know that coaching isn’t telling. It’s about asking good questions and pulling out of them why they are or aren’t doing what they should be doing. And they are always so defensive. This year, I tried to put some metrics in place for key activities and I heard through the grapevine that I’d become a micro-manager. I hated to hear that. I want the team to like me. I just don’t know what I’m doing wrong.

“That’s quite a list, friend. Can I share with you some good news and some bad news?”

“Of course you can Santa. But first, thanks for asking me for my wish list. These are things I’ve been thinking about and it feels good just to get them out of my head. Thank you, Santa. Now, what is the good news?”

“The good news is that you have a good list. You are thinking about things the right way. You want to grow and develop your people. You want to build a culture of accountability filled with people that are willing and able to do the job. Nice job friend. You want the bad news?”

“I can’t help you. Santa is in the toy business. The stuff you are talking about — well, it requires a little more than even Santa can muster. But here’s the really good news – I know someone who can help you with your wish list. Call Robin Green. He’s a Sandler trainer in Richmond and he’s helped folks that are in your situation – heck, even worse. And tell him Santa sent you”

Robin Green, friend of Santa, is an award-winning Sandler trainer in Richmond, VA. He works with companies to help them create strong sales cultures. You can reach him at 804.914.1723.

Four Best Practices for Sales Leaders Who Are Pressed for Time

What concerns you the most as a sales leader? If you are like the sales professionals we work with regularly, it would be a lack of time. This is one of the most common daily pain points. Sales leaders tell us they’re concerned about not having enough hours in the day to strategically plan out an approach, train the team on best practices, or debrief on best and worst cases of a sales pitch.